The City of North Adams, though remote, was no stranger to the Influenza Epidemic that rolled through the United States from 1918 to 1919. Cases of Influenza were so disruptive that the city found it necessary to open a new, temporary hospital for the sole purpose of treating patients with Influenza. Thirty-six people were treated, 12 of whom died.1 Most of the evidence of the outbreak can be found in the local newspapers and town reports. In the 1918 Town Report J.H. Matte, M.D. and Rosa Fletcher, M.D. of the Board of Health had this to say:

The outbreak of Influenza in our community interfered considerably with our routine work. We kept on the alert to eliminate from school any suspicious case. During the epidemic we had to neglect cases of nose and throat, the local hospital being  unable to make room for our clinics, and Miss Edith Maxwell, whose valuable assistance we need for getting parents’ consent to operations and making appointments for the same, being herself in charge of the Influenza Hospital.  For the same reason we had to defer to a future date cases of defective eyes and hearing.
During the height of the epidemic hundreds of children were absent from school;  a few being sick, many being kept at home by the parents as a measure of intended prophylaxis.2

An except from an article in an October 1918 edition of The Transcript explains additional resources brought in from the government to aid in the eradication of the epidemic: 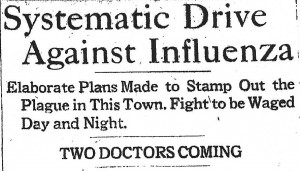 Saturday evening, Dr. Greaves, who has been helping in the [illegible] work arrived and is answering emergency calls. Another physician, loaned for the purpose by the government is coming today, and one of these physicians will be on duty by day [illegible] by night. They act as emergency doctors, making the rooms of the board of health their headquarters. It is their method to make one call on each patient without other compensation had that made them by the government and then  turn the case over to the regular family physician.

The board of health office is now open 24 hours of the day with a clerk in charge who answers all telephone calls, supervising the calls of the nurses and the emergency doctors…3 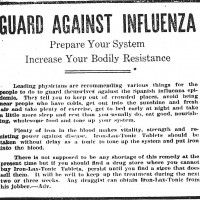 An advertisement for a preventive product, October 1918. 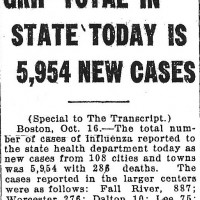 A small blurb in the North Adams Transcript tallies the new cases of Influenza, October 1918. 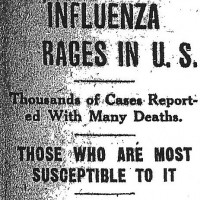 An advertisement for the popular illness remedy “Fruit-a-tives”, October 1918.