The Pageant of the Mohawk Trail 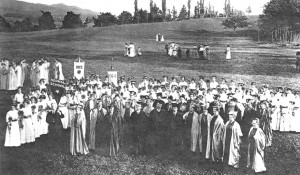 In 1914 North Adams was still a fairly isolated place. With the opening of the Mohawk Trail as a scenic highway many hoped that would change. The new highway would prove to be an immense source of pride for the residents of North Adams. The opening of the trail came with a stunning pageant put on by a vast number of people from the community. The pageant depicted scenes from the history of the Berkshire area from the founding to the present.  A program was published after the pageant, offering a full and very detailed account of not only the event but a history of the area. Author Harry T. Pram offers a brief introduction:

By the middle of August, according to present engineers’ estimates, there will be opened to traffic a new state highway in Massachusetts. As soon thereafter as is feasible, a commanding figure, the heroic statue of a lone Indian, silhouetted against the sky three thousand feet above the sea level, visible for miles from the valleys far below, will dominate a wonderland new to the experience of those who, by thousands, have re-discovered New England, and return ever and again to seek fresh manifestations of a charm that is found nowhere else in America.

This statue, conceived to perpetuate in steadfast dignity the spirit of a vanished past, will not only be symbolical: it will possess a significance founded in a unique association of historic facts.

For this road is no ordinary road. A new highway, it is yet the oldest highway, possibly, through this section of the country. Obscured for generations, the knowledge of its origin confined largely to students of folklore, its part in the stirring scenes and important events of early American history recorded only in local commentaries, the very reason for its obscurity is destined to become its greatest fascination. That reason is the hitherto wellnight inaccessible nature of the region through which it passes.

This region is, from the standpoint of the tourist, the undiscovered section of the world-famed Berkshire Hills, where they reveal to the initiated the true inwardness of their beauties, much as the white man first came upon them: where they reach their rugged heights, culminating in the mountains that form the western barrier of Massachusetts.1

The “Pageant of the Old Mohawk Trail,” in celebration of the

building of the new Mohawk Trail, was presented in Hoosac Valley Park, North Adams, Massachusetts, on the 17th, 18th, 19th, and 20th of June, 1914. It portrayed events which have occurred along the Trail from the beginning of the seventeenth century to the present time.

In the first scene, “The Spirit of the Waves,” a large number of the Normal School Juniors took part. Dressed in shades of blue, to represent the colors of water, when the spirit of Greylock paused in the center of the green, the Spirits of the Waves, led by the Spirit of the Waters appeared from the river edge and surrounded her, advancing and retiring in exact representation of waves. Finally they receded, and Greylock, rising higher and higher, until he stood on the stop of the slope at the back of the Pageant green, looked back for a moment and disappeared.

The Pageant was closed with one of the most beautiful episodes,  “The Grand Finale.” In this, the Normal Faculty and members of the school represented the “Spirit of Education.” The scheme of color was a complex complementary one and very brilliant as seen against the yellow-green back-ground of the grass and trees. The Normal color, yellow, was chosen with the thought of completing the cycle of light when the school pennant should be used with the national flag.

In the procession, a student, wearing a silver helmet and dressed in blue and white, typifying truth and purity, mounted on a horse, symbolizing  vision and progress, went forward carrying the state flag.  Principal F.F. Murdock and Hon. C. Q. Richmond, a member of the state board of education followed, carrying the school banner on which was lettered “Normal School,” with a single star for further decoration. The use of the star on the school banner corresponded in thought to its use on the state flag; the school being one of the normal schools within the state, while the state, one of forty-eight in the union…

The whole pageant was a splendid success and the Normal students will always remember it as one of the happiest events of their Normal life.