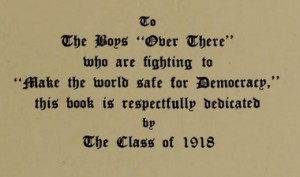 The Class of 1918 dedicated their yearbook to the men serving abroad.

Throughout the earliest portion of the 20th century, the students, faculty, and administration of the Normal School implemented changes that would bring the school and the North Adams community together. When the United States entered the Great War that process was hurried along significantly. Throughout the First World War the students of the Normal School came up with vibrant and entertaining ways to support the war effort.

The Dance of the Allies 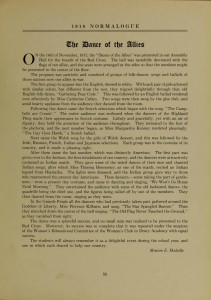 Click to read the full description of the dance.

On the 16th of November, 1917, the “Dance of the Allies” was presented in our Assembly Hall for the benefit of the Red Cross. 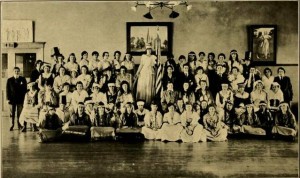 The hall was tastefully decorated with the flags of our allies, and the seats were arranged at the sides so that the numbers might be presented in the center floor. The program was patriotic and consisted of groups of folk-dances, songs and ballads of those nations now our allies in war.1

In 1918 a program was put together to celebrate the anniversary of the entrance of the United States into the First World War. While meant to be a form of entertainment, the program covered the concepts of solemnity and fervent patriotism in difficult times as well as jubilant pride.

Oftentimes one feels that words are too weak to express fully the character and real meaning of any such occasion as that which demands and brings forth the quickening heart beats of a patriotic soul. So it was that this finer enthusiasm was afforded us when on April 11, 1918, the student body of seniors presented “The American Anniversary Program,” which had been carefully planned and worked out by Miss Baright. She had cleverly adopted it as a most appropriate means of celebrating one of the greatest events in history, that of the entrance of the United States into the world war of the present day.

The entertainment consisted of recitations and singing,– recitation of literature written only about this present conflict, and singing of patriotic songs.

In the arrangement of the program much genius was shown. The first part was entitled “With One Clear Call for Me,” and contained such numbers as would be fitting under this heading. Following were other headings, such as, “In Unity There is Strength,” “The Enemy Is Loose Over There,” “The World Must Be Safe For Democracy,” “Do With Thy Might What Thy Hands Find To Do,” “If There is No Vision, the Nation Will Perish.”

Only those who attended this entertainment can fully appreciate any words concerning it, for satisfaction, patriotism, and pride, were the feelings enjoyed by all before the close of that never-to-be-forgotten evening.

The Glee Club Does Their Part

A popular activity at the Normal School, the Glee Club certainly did their part in keeping up morale in the community. After all, at the end of a long day in war time, when resources are scant, music can be a great source of comfort or invigoration. 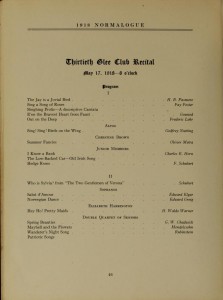 Click to view the full program from the Glee Club Recital.

May 17, 1918, at eight o’clock in the Normal School auditorium.  We had a large and appreciative audience.

Interesting features of the concert were that our entire program consisted of our own talent, and that we have the

recital independent of financial aid from the school.

The patriotic songs were very appropriate and were well received by the audience. Rounds of the slogans of today (saving wheat and helping in the war work) and “The Unfurling of the Flag,” and the “U.S.A. Forever” were sung.3