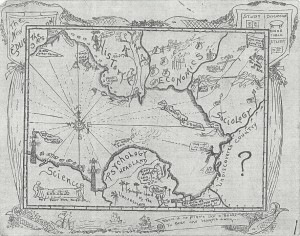 A sketch thought to be done by Mary Curran, date unknown.

Mary Curran was an incredibly accomplished influential figure from North Adams, but her influence permeated much of the East Coast, Philadelphia in particular. After studying widely in English, History, Psychology, and Art, Curran returned to North Adams to teach English at Drury High School, where she remained for nearly ten years. Besides her undoubted influence as a teacher, Curran also founded the first working girls’ club in North Adams. It was her work with the National League of Girls’ Clubs that would make her such an important figure in local women’s history. These Girls’ Clubs were a great way for women to simultaneously socialize and develop important technical skills that would help them inside the home and in the work place.1

A 1921 article in The Herald tracks the success and popularity of the Girls’ Clubs and makes a particular study of North Adams. The article includes a brief history of the Girls’s Club in North Adams and documents Curran’s contributions.

Three years ago last November – just after the armistice was signed, -agencies both within and outside the city started a movement to organize a club for the girls of North Adams who were in various industries and business establishments of the city. It fitted in with a part of the larger educational program upon which the city was to launch. The school committee entertained a most generous spirit regarding the community use of the new Drury high school building. A large number of the city’s young women were not enjoying the privileges of the high school, the building could be offered them as a centre for recreation, classes and physical education, if they were organized. Through the school superintendent a poll was taken in most of the industrial and business establishments. Seven hundred girls signed the slips which indicated interest in a club. The large response rather altered the original plans. It was recognized that not all these girls would become members, yet everything pointed to a large club. A consultation followed with those interested – including some women who were helpful in clubs of nearby places, and Miss Mary Curran, a most valuable local adviser. It was the consensus of opinion that the demand called for quarters or club rooms open every day – and that Drury could be used for classes and large events – and that there should be a salaried leader trained for this particular line of work. Miss Curran consented to assume this position and signified that she would go at once to Boston and there make a study of organized club work among girls. At this point the good fortune of the club started, for everyone felt the greatest confidence in Miss Curran.2

Nearly ten years after its founding, the North Adams Girls’ Club seemed to be flourishing. A small section of The Broadcaster, a monthly paper published by the Massachusetts League of Girls’ Clubs, depicts a very busy bunch of working North Adams girls.

How does it sound when we say we served 150 people in our Club rooms all at one time. Well that’s what we did the first of this month. The Salvation Army planned a drive and decided it best to start off in the form of a Banquet with the Girl’s Club catering. It proved very successful.

Everyone this side of the Mississippi has no doubt heard of the Flood that hit northern New England. Many of us happened to be in the flood-strickened [sic] area. We are endeavoring to do our bit of the relief work by aiding the Red Cross with their sewing.

Other than the above and the usual monthly activities the past month was one of ordinary routine.

By the early 1920s, Curran was an authoritative figure in the League of Girls’ Clubs. In this 1921 report on the importance of publicity for the success of the Girls’ Clubs, Curran outlines her own philosophy on the purpose of accomplishment:

I want to say something about the pieces of National League literature which it seems advisable to print. They say that women are awfully fond of having something on the shelves to point to as things done. Somebody recently said that all the war-time interest in canning was not really patriotism but rather this desire to have row upon row of jars on the shelves. I know that to a good many of you an efficient publicity department would mean merely row upon row of booklets and circulars. If we had plenty of money I should agree but the booklets and circulars will be useless until you have a more efficient method of distribution and this in large part rests with your organizing secretaries, and with your club secretaries.4